If you’re looking for the perfect chemist, you’ve found it. Our doors are always open

What Is Cervical Cancer?

The symptoms aren’t always obvious. In fact, in the beginning, there are usually no symptoms at all. At an advanced stage, symptoms may include everything from pelvic pain to pain during sexual intercourse. Abnormal vaginal bleeding also occurs.

The most common cause is the HPV infection. Much less important risk factors include smoking, promiscuity, weak immune system, and birth control pills.

The early stages of cervical cancer are limited to an abnormal cell growth around the cervix. These can be treated successfully through radiotherapy and/or surgery. However, at later stages, the cancer spreads to the surrounding areas, which makes the outlook less positive.

The chances of living at least five years after being diagnosed with cancer of the cervix vary signficantly from stage to stage:

Now, here’s some good news: cervical cancer is preventable. Cervical screening tests are able to reveal pre-cancerous cell changes before they develop into cancer. HPV vaccination may help you protect from some types of HPV. 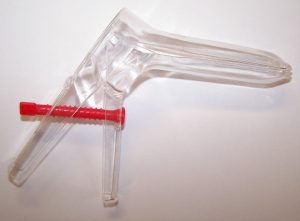 The cervical screening test is called a cervical smear.

It consists of taking a a small sample of cells from the surface of your cervix. This is done with an an instrument called speculum, which is put inside your vagina. The speculum has two arms which are able to spread apart the vagina walls. Afterward, doctors use a small brush or spatula to scrape the surface of the cervix. The cells are afterward put into a liquid, and sent to a laboratory.

The smear test picks up pre-cancerous changes. If you have an abnormal result, it does NOT mean you have cervical cancer. But you may need further tests or treatment for an abnormal smear.

The human papilloma virus (HPV) is responsible for more than 90% of the cases of cervical cancers globally. HPV vaccines became first available in 2006, and, as of 2017, are part of the routine vaccination programmes in more than 70 countries.

However, the vaccine does not protect against all types of HPV. That’s why regular cervical screening is essential even for those who have taken the vaccine.

Free advice and support by specially trained advisors to provide expert help to break the habit of a lifetime.